Why use ScrubChem?
The PubChem Bioassay database is a non-curated public repository with bioactivity data from many sources, including: ChEMBL, BindingDb, DrugBank, Tox21, NIH Molecular Libraries Screening Program, and various academic, government, and industrial contributors. Bioactivity datasets built on PubChem data can be the largest and most diverse for use in data-driven discovery & development. However, this data is difficult to use in aggregate form, mainly due to lack of interoperability and standardization among its 1.2 million assay records. Methods for extracting this public data into high-quality, computable datasets, useable for predictive and analytical research, presents several big-data challenges for which ScrubChem is being developed as a manageable solution. To learn more, refer to the Poster. A manuscript will soon be released with additional details.

Records (rows) in a Data Table 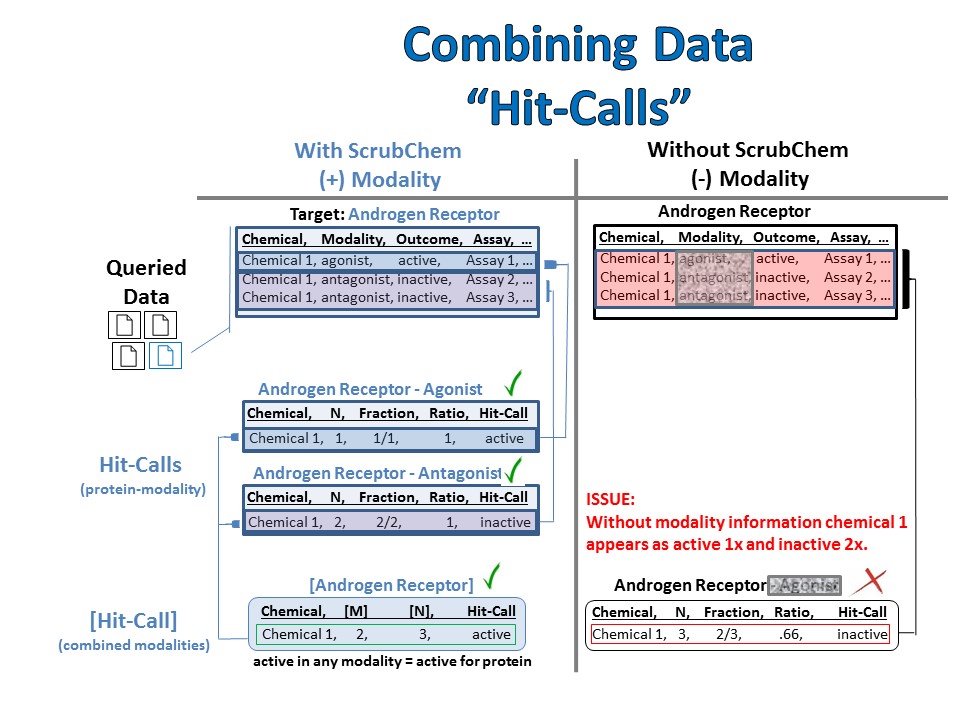 Modality – mode of target being tested (e.g., agonist, antagonist, inhibitor, activator). Outcome – specified by a depositor as active, inactive, inconclusive, or unspecified. N – number of outcomes reported and used in deriving a hit-call. Fraction – number of outcomes supporting a hit-call out of the total (N) reported outcomes. Ratio – decimal representation of the Fraction. Hit-Call – derived from the ratio of agreement, with a threshold greater than 0.5, for outcomes of a given chemical and tested modality. Protein-Modality Hit-Call – A hit-call made for a unique protein and modality pair. Combined Modalities Hit-Call – A hit-call made from combining all protein-modality hit-calls for the same protein (active if observed as active in at least one protein-modality hit-call). [M] – Number of modalities combined together to make a final hit-call. [N] – Total evidences (N) used in a hit-call made from combining modalities.


Terms of Use
There is to be no scraping or programatic access of information on this website without express permission. ScrubChem and its agents can not guarantee the accuracy of any information provided and do not advise the use of this data for medical decisions. This data and software are provided “as is”, “where is” and without any express or implied warranties, including, but not limited to, any implied warranties of merchantability and/or fitness for a particular purpose, or any warranties that use will not infringe any third party patents, copyrights, trademarks or other rights. In no event shall ScrubChem, nor its agents, employers or representatives be liable for any direct, indirect, incidental, special, exemplary, or consequential damages however caused and on any theory of liability, whether in contract, strict liability, or tort (including negligence or otherwise) arising in any way or form out of the use of this data or software, even if advised of the possibility of such damage. All materials on these pages are copyrighted and all rights reserved unless otherwise indicated. No part of these pages in any form, either text or image may be used for any purpose other than personal use. Restrictions include but are not limited to derivative works, reproduction, modification, storage in a retrieval system, retransmission by any means, electronic, mechanical or otherwise.